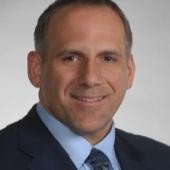 John Wolfe was named the Port's chief executive officer in June 2010. He sets the organization’s vision and strategy, and oversees a staff of about 250.

Before being named CEO, Wolfe had served as the deputy executive director of the Port since June 2005.

Prior to joining the Port of Tacoma, he served for two years as the executive director of the Port of Olympia, and before that as Olympia's director of operations and marine terminal general manager.

A native of Puyallup, Wash., Wolfe earned a bachelor's degree in business administration from Pacific Lutheran University in 1987.