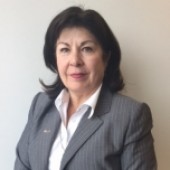 Susana Gonzalez-Murillo is a Vice President at U.S. Bank.  She serves as country manager for Latin America, Canada, Spain and Portugal, and is responsible for providing current and prospective customers with information on how international banking services involving U.S. Bank’s footprint, Latin America and Canada work to facilitate business transactions in these markets.

Ms. Gonzalez-Murillo joined the bank's International Banking Division in 1993.  Prior to joining the bank she worked as a consultant for Leader Trade and Finance, Inc., (Insurance Broker) and in the International Banking Division of Security Pacific Bank, Seattle, in public relations for L.A.B. Airlines, and at the Bolivian Embassy in Paris, France.

A graduate of La Sorbonne in Paris, France, Ms. Gonzalez-Murillo holds an Associate of Arts Degree in French Language.  She has continued her education at the American Institute of Banking (AIB) and the University of Portland's Northwest Intermediate Banking School.  She also is a graduate of the Pacific Rim Bankers Program at the University of Washington where she received an Outstanding Achievement Award.