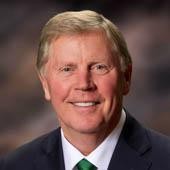 As mayor of the largest city in Snohomish County, Stephanson has focused on public safety, economic and downtown development, budget and finance, quality of life issues and creating additional access to higher educational opportunities.

As mayor, Stephanson secured authorization from the legislature to bring Washington State University into Everett to lead University Center to expand higher education opportunities. His vision and goal is to expand WSU to a full-branch campus to provide employers with a ready pool of educated employees.

Before serving as mayor, Stephanson worked as a director for Verizon Communications where he led a start-up venture to provide buried service wire placement and utility locating services in numerous states across the country.

During his more than 30 years of corporate business experience at GTE and Verizon Communications, Stephanson also served as general manager of customer service operations for Washington State and as a division manager directing telecommunications operations in a four-state area.

Prior to his tenure as the City’s executive director in the mid 1990s, the Everett native served as an Everett City Council member from 1982 to 1988, serving as council president/mayor pro tem two of those years. While on the City Council, Stephanson served as budget chairman and supported a progressive $30 million capital program for city projects that included an expansion of the library and improvements to city parks.

Stephanson and his wife Victoria have been married for more than 40 years. They have three children and two grandchildren.