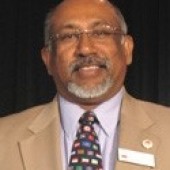 Visakan Ganeson is currently the Executive Director for International Education at Everett Community College. Visakan earned his BBA in Finance/Banking from the University of Louisiana and MBA in Marketing from Washington State University. His leadership at Everett Community College has grown the program over 500% in six years. Originally from Malaysia, he has traveled widely to over 22 countries and lived overseas for 22 years (including study in Sri Lanka).

With over 25 years of experience working both at a university and a community college, Visakan's marketing, recruiting, programming and advising in international programs has been extensive.  In 2002-03 he was Chair of Study Washington (a group cooperating with the U.S. Commercial Service and the Washington State Office of Trade to raise the State's profile as an education destination for international students).  In 2003, he was a member of the Governor's Trade Mission to China, and a steering committee member of the International Education Exchange Community College Consortium (country coordinator for Japan, Hong Kong, Macau and Taiwan).   In September 2010, Visakan began serving on the Board of the Future of Flight Foundation, and in 2014, served as Board President for the Future of Flight Foundation